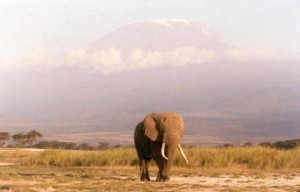 The beautiful Amboseli National Park stretches 151 sq km in size and is part of an ecosystem that spreads itself across both the Kenyan and Tanzanian borders. Home to mostly the Maasai people, the Park does attract outsiders that hope to make money from the tourist-driven economy and excellent agricultural potential along the swamps. Easily accessible by road albeit a bumpy journey, Amboseli is only about a 200 km drive from Nairobi. However, beware that the roads are very dusty in the dry season and almost impassible in the wet season. The Park is also accessible by air as planes can land in a small airport within Amboseli.

Although Amboseli is one of the smallest game parks in Kenya, it is still worth the visit as animals are easy to spot amongst the short, well-munched vegetation. Offering an unmatched and spectacular view of the world’s tallest snow-capped Mount Kilimanjaro. Streams running of Kilimanjaro create large swamps within Amboseli and great feeding grounds that often attract a large diversity of animals and birdlife. Herds of elephants can easily be spotted amongst the short grassy plains. And if you’re lucky, you can spot a lion stalking its many animals of pretty: cheetah, hyena, wildebeest, baboon, buffalo, gazelle, jackel, and zebra. Lions are frequent in the area and regardless of whether you see the magnificent beasts attacking their prey, surely you will be able to see them roaming in the plains. The Amboseli also offers you the best opportunity to spot the endangered black rhino.