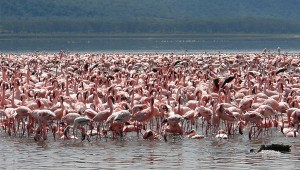 As part of the Rift Valley soda lakes, Lake Nakuru is protected by both Lake Nakuru National Park and the Ramsar Convention. The lake is best known for attracting thousands to millions of flamingos that nest along its shores and feed on the algae in its shallow waters. The best location to see this spectacular sight is from Baboon Cliff for a view over the lake. Near the lake, a fenced off area serves as a sanctuary to protect black and white rhinos as well as the Rothschild giraffe species.

Located only 160 km from the capital Nairobi, it is a frequent and popular day trip from the city. Nakuru is world famous for one of the greatest bird spectacles in the world and is known as a “Bird Watchers Paradise”. Home to both the Lesser and Greater flamingos as well as pelicans and cormorants that feed on the fish within the alkaline waters. In addition to these fine species, there are also 400 other types of bird species that reside in this beautiful environment. Herds of zebra, waterbuck, buffalo and other mammals can often be found on the lake’s shore offering a variety of wildlife species to see. Before you set off to see this magnificent site, check first the conditions of the lake as they frequently change throughout the year.