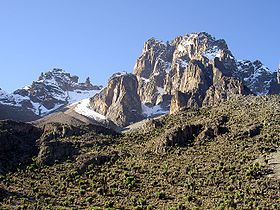 Mount Kenya is the second highest mountain in Africa after Mount Kilimanjaro at 5, 199 m high. It, too, is an ancient volcano that is no longer active. Unlike Kilimanjaro, Mount Kenya has 12 glaciers that are receding at an unpredictably high rate. The glaciers make numerous ridges and valleys that create a number of high peaks all near the mountain’s center. The water runoffs provide the main source of water for the Tana River and the Ewaso Ng’iso North River as well as provide drinking water for over 2 million people in Kenya.

Due to the changes in elevation Mount Kenya is home to a number of different ecosystems, all forming distinct zones in belt-shapes around the mountain. This provides its hikers with a variety of interesting flora and fauna to see as they ascend the mountaintop. The base of the mountain is surrounded by a thick forest and rich soil, making this area home to many various tribes such as Maasai, Ameru, Embu, and Kikuyu that use this land to grow food for their villages. In addition, animals such as elephants, porcupines, monkeys, anatelopes, and buffalo can all be seen at this level. At the next level is a large belt of bamboo that suppresses other vegetation such as trees or plants. Following the level of bamboo lies a timberline forest where the trees are generally smaller and more intact as they are better protected. At these higher elevations, visitors can frequently see the tree hyrax, groove-toothed rat, mole-rat, and even leopards. Eventually, the environment becomes too hospitable for trees to grow, so heathland and chaparral take over. Flora must adapt to the high altitudes, lower average temperatures, and freezing nights to survive. 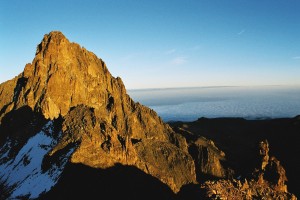 Mount Kenya features a number of excellent rock climbing routes and hiking trails. Ice climbing is also available; the most famous routes are Diamond Couloir and Ice Window route. However, these routes are extremely dangerous due to the melting glaciers. There are eight walking routes up to the main peaks of the mountain, namely: Meru, Chogoria, Kamweti, Burguret, Timau Routes, Sirimon, and Naro Moru. If you wish to climb these routes, you are required to get permission from the Kenya Wildlife Service.

There are a number of accommodations located on Mount Kenya from very basic lodges to hotel-style. Many of these do offer guests guided walks, fishing, and bird watching. At higher elevations on the mountain the huts are much more basic with bunkrooms and beds, basically offering a place to rest, eat, and cook. Visitors may camp in and around the hut areas to limit the environmental impact of this action.