Situated on the Nairobi River, Nairobi is one of the largest cities in Africa and home to a population of between three and four million people. Commonly known as the “Green City in the Sun”, Nairobi is also the capital of Kenya. A hustling and bustling city that is highly accessible by plane, train, bus, or other means; it is a popular tourist travel destination. The city is a perfect mix between rural and urban, offering its visitors the luxury of seclusion and isolation that nature offers but also the fast-paced modernity of city life.

It’s history dates back to the 19th century when this city was founded in the late 1890s as a British railroad camp on the Mombasa-Uganda railroad. The city then served its purpose as the capital of the British East Africa Protectorate. In the 1990s, Nairobi suffered from civil unrest due to local opposition against the Kenyan President Daniel arap Moi. 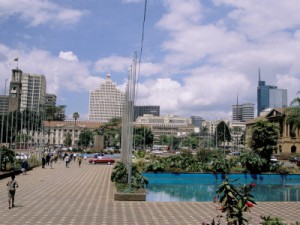 Nairobi is most known for being the safari capital of Africa as it offers a wide variety of safari opportunities in the plains, cliffs, and forests that make up the area surrounding it. This area is known as Nairobi National Park where tourists can enjoy seeing rhinos, cheetah, hippos, lion, giraffes, buffalo, zebra, wildebeest, and over 400 species of birds. Safaris include sport, scenic, specialist, wildlife, adventure, cultural as well as ecotourism tours. In addition to these safari opportunities, Nairobi also is home to the Sheldrick Elephant Orphanage and Giraffe Center. The city itself offers a number of activities such as excellent shopping, a variety of entertainment both daily and nightly, interesting culture, and great restaurants. For those into sports, Nairobi features golf, athletics, horseracing, soccer, cricket, polo and rugby to keep its visitors busy.

Nairobi enjoys a subtropical climate with chilly nights and warm days. The best months to visit are from December to March when temperatures are warmest.