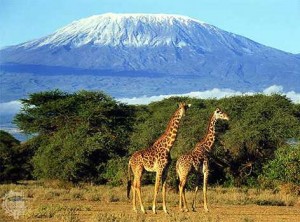 Mount Kilimanjaro is the highest mountain in Africa at 5, 895 meters high and is a highly sought after mountain to climb albeit expensive. The first attempt at ascent occurred in 1861 by a German officer named Baron Carl Claus von der Decken accompanied by the British geologist Richard Thornton, but went only as far as 8, 200 feet. In a second attempt Von der Decken reached a height of 4, 280 meters. Following these two the mountain was ascended in multiple attempts by German geology professor, Hans Meyer and Austrian climber, Ludwig Purtscheller. Only on July 29, 1912 was the first ascent of the highest summit of Mawenzi by German climbers Edward Oehler and Fritz Klute.

Today, there are six official trekking routes: Rongai, Marangu, Shira, Lemosho, Umbwe, and Machame. Rongai is the easiest route, however it remains the least scenic and most difficult summit. While Machame is the most scenic route up a steep slope on the mountain; however, it can still be done in about six to seven days. If you are looking into climbing the summit, it is highly advised to engage in an extensive amount of appropriate research beforehand. It is important that the proper equipment is purchased prior to the hike and that all hikers are physically capable of a climb at such high altitudes, strong winds, and low temperatures.

The mountain has a wide variety of biodiversity and unique vegetation, however still remains quite low in endemic species. Some of the flora home to this desolate environment is bunchgrass tussock grasslands, giant groundsels, and a variety of forest types (montane ocotea, cassipourea, juniperus, and subalpine erica). The rare spotting of animals to date have only been wild dogs and how they survive in such hospitable climates remains a mystery.