The Ngorongoro Crater is claimed to be the “8th Natural Wonder of the World” and is often referred to as “Africa’s Eden”. The Ngorongoro is a huge, completely unbroken volcanic caldera that formed when a massive volcano fell in on itself roughly two to three million years ago. 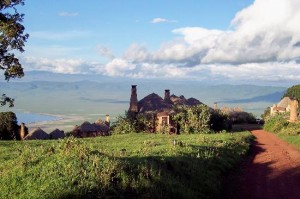 The Crater forms a natural enclosure for much of the wildlife in the surrounding area. Large herds of zebra and wildebeest can be found grazing within the crater’s limits. Many lions are also attracted to this location; however, there have been many problems with inbred lions having genetic problems since not many new animals have come into the area. In addition, there is a decent population of the endangered black rhinoceros that flock to the crater to feed in its lush grassy floor. This is probably the best location for a chance to see one of these magnificent creatures. Surrounding the crater’s rim, one can be sure to spot elephants, buffalos, jackals, spotted hyenas, mountain reedbuck, cheetahs, and rare wild dogs. This is also an excellent location to see various bird species as over 500 different types call this place home. Some of which include flamingos, the white pelican, and ostrich.

An excellent opportunity to see a unique landmark as well as the rich and plentiful amounts of wildlife that call this Crater home, it is one of Tanzania’s greatest treasures.