Kampala is not only the capital city of Uganda, but it is also the country’s largest-boasting a population of roughly 2 million people in its five main boroughs. This unique city dates back to when Mutesa I the king of the Buganda tribe chose the area as one of his most prized hunting grounds. The city quickly grew to become the capital of the Buganda kingdom from which many historical buildings have survived, even after the Uganda-Tanzania War. Although, the war damaged some buildings, many have been rebuilt or repaired. The city now hosts numerous shopping malls, banks, hospitals, educational institutions, and hotels. To reach Kampala by air you will fly into the city of Entebbe, from there it is a short taxi, minibus, or hotel shuttle ride away. 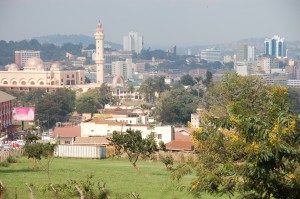 This ancient city was built on seven hills each boasting various tourist must-sees. Kasubi Hill is the home of the famous Kasubi Tombs that are the burial grounds for four kabakas or kings of Buganda and is UNESCO World Heritage Site. The tombs are said to be an important spiritual and political site for the people of the Buganda tribe. Mengo Hill features the Lubiri Palace where the present kabaka resides. In addition, this Hill also hosts the Headquarters of the Buganda Court of Justice and the Lukiiko or Parliament building. The famous Kibuli Mosque resides on Kibuli Hill and it is where Islam was originally brought to Uganda. The Protestant people were the first of all Christian missionaries to arrive in Uganda and their Namirembe Anglican Cathedral can be found on Namirembe Hill. Meanwhile, the Rubaga Catholic Cathedral is located on Lubaga Hill and is the headquarters for the White Fathers. In addition to these remarkable buildings, Kampala is also home to Makerere University, the headquarters of the East African Development Bank, and one of only seven Baha’i Houses of Worship (known as the Mother Temple of Africa) in the world.

To get around the city there is three main modes of transportation: matatu, boda bodas, and special hires. The quickest way around is via the boda bodas which are motorcycles that you can ride on the back of for between 1,000 and 2,000 USh, but make sure to agree upon a fare before the journey starts. Be careful on these motorcycles as they are extremely dangerous and account for many of the hospital visits in the city. The matutas are a safer route of travel in that they are a series of minibus taxis carrying about 15 passengers per bus for a fare of 1000-15000 USh per person. If neither of these modes of transport interests you, special hire though private taxi companies are always available. 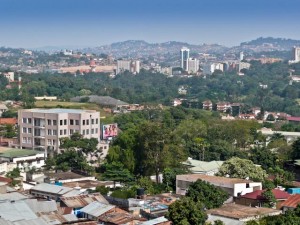 The city is home to a very tropical wet and dry climate. Due to the city’s high elevations it is usually a bit cooler than the other cities in the surrounding area. There are two designated wet seasons as well, in August through December and then again in February through June.

There is much to do in this bustling city and spending a few days to a week should be more than sufficient to experience all it has to offer.