Uganda’s largest national park, Murchison Falls National Park also referred to as Kabalega National Park, is located in northwestern Uganda and spans an impressive 3, 480 sq km. The Park combined with the Bugungu Wildlife Reserve and the Karuma Wildlife Reserve, forms the Murchison Falls Conservation Area. In addition, it is named after the Murchison Falls. The Falls are a spectacular site to see as the Nile River drops through a narrow gorge along its path northward. A boat excursion near the falls will surely leave you breathless as the nature all around provides spectacular views from all directions. 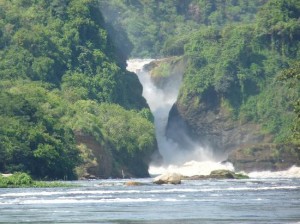 Like many other parks in Uganda, its wildlife is still recovering from the heavy poaching that went on in the country years ago. Unfortunately, rhinos in this area have already become extinct. However, a rhino sanctuary in the south of the Park was started and in 30 years time, about 40 to 50 rhinos will be able to be released back into the Park’s borders. Despite this set back, Murchison still claims to have the Big Five and is sure not to disappoint its many visitors as it is the only park in all of Uganda that does. Other animals that call this Park home include lions, leopards, giraffes, hippopotamus, elephants, water buffalo, antelope, crocodile, hartebeest, Uganda kob, , oribi, amongst others. The rare shoe-bill stork can also be seen flying in and around the Nile River.

The best time to visit is during the hot dry months of January and February.