Queen Elizabeth National Park is often referred to as “the Pearl of Africa” and is extremely scenic featuring two beautiful lakes overlooked by an elevated peninsula. Located in western Uganda, this park covers 1, 978 sq km and boasts one of the highest biodiversity location ratings in the world featuring tropical forests, volcanic craters, and grassy plains. Many of the animals that roamed the Ugandan environment were poached out in the past, but due to new regulations and laws this area is now fully protected. 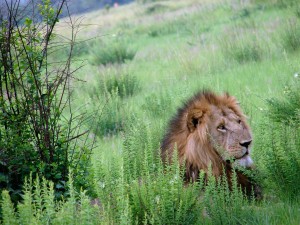 Due to the extreme biodiversity this Park offers, it is home to roughly 100 different types of mammals and approximately 600 various bird species. One can be sure to spot various buffalo, giant forest hogs, warthogs, rare aquatic sitatunga antelope, horned Uganda kob, waterbuck, leopard, topi, and elephant. However, this Park doesn’t contain any giraffe, impala, zebra, or rhinos. The Ishasha area of the Park is home to a very unique predator, the tree-climbing lions, who’s males have black manes. Be sure to visit the Kasinga Channel as it is home to world’s largest concentration of hippos. Taking a relaxing boat ride on the Channel is a popular attraction and a great way to see the hippos! In addition, the sunset over the water is supposed to be spectacular.

Some other attractions include the Kyambura Gorge, which is a rich tropical forest with thick treetop canopies where you will be sure to spot several chimpanzees. The Maramagambo Forest is also home to many chimpanzees and other various monkey species. The Park is home to many rare and odd bird species, attracting bird watchers from all over the world. Amongst the rare breeds is the whale-headed stork standing more than a meter tall.

The best time to visit the Park is during the hot dry months of January to February. The dry season is typically from June to September when most of the animals can be found near water sources. The rainy season is not the time to visit the area s road may become impassible.