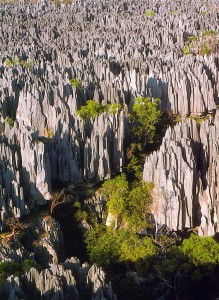 The hidden treasure of Tsingy de Bemaraha National Park is one of the least known about parks in all of Madagascar, but it is also one of the best. Its scenery of both flora and fauna can be unparalleled when compared to some of the other parks on the island. Not only is the Park the largest in the country, it is also a popular stop for botanists due to its rich flora. In addition, Tsingy hosts the unique limestone pinnacles that rise 50 m tall over the land in a myriad of gorges and canyons. Undisturbed natural habitats such as lakes, mangrove swamps, forests, and the Manambolo River valley create excellent scenic views for visitors. The Manambolo Gorge features a spectacular site to see waterfalls and lemurs.

Although the Park is not as accessible as others in Madagascar, due to an increase in interest Tsingy is now becoming a more common part of tour operator programs. The Park was recently named a UNESCO World Heritage site due to its unique environment. Tsingy has a large diversity of animal species to see including 90 species of water birds, 54 species of reptiles, 15 species of bat, and 13 species of lemurs. In addition, the Park contains over 650 various plant species. The best way to experience the Park is to hike and walk through its landscape while taking in the breathtaking views and nature. For the more adventurous tourist, Tsingy offers rock climbing as well.