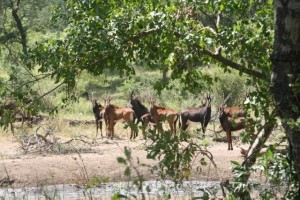 The Majete Wildlife Reserve is a vast area of 70,000 hectares located in the south of Malawi near Blantyre and is part of Africa’s Great Rift Valley. It was originally granted a protection status back in 1955, however, extensive poaching hurt the area’s wildlife in the 1980s and 1990s. Since 2003, the African Parks Network and Malawi government have worked together to turn the Reserve into a model of sustainable development and biodiversity-even reintroducing endangered species in the area. One of the world’s fascinating natural wonders, the Kapichira Falls can be found cascading over ancient rock formations.

The hilly country is covered in beautifully tall, deciduous woodlands with stunning grassy glades and the occasional patches of thicket. In the far east there is a mixtures of acacia, leadwood, and marula savannah with dispersed baobab trees and areas of ilala palms. Lying hidden among the beautiful nature lies over 3,000 species of animals including black rhino, buffalo, eland, elephant, warthog, zebra, kudu, impala, waterbuck, sable, and Lichtenstein’s hartebeest. The large population of elephants offers tourists the opportunity to track the various species within the Reserve. Additionally, large numbers of crocodiles and hippos can be found lying lazily in the Shire River. The Reserve is best known for its immensely large bird population. There are over 300 species of birds that call this area home, making it a great location for bird watching.