The Fish River is, at 650 kilometres, the longest river in Namibia. Its source lies in the eastern Naukluft Mountains and flows southwest of Ai-Ais into the Oranje.

The Fish River Canyon, situated along the lower reaches of the Fish River, is one of the most impressive natural beauties in the southern part of Namibia. It developed predominantly during the pluvial times – a rainy climatic epoch – many millions of years ago. With a depth of up to 550 meters, the Fish River Canyon is the second largest canyon in the world, before the Grand Canyon in America. The enormous gorge meanders along a distance of approx. 160 kilometers through the fissured Koubis massif all the way down to Ai-Ais. The canyon starts near Seeheim, is 161 kilometres long and ends at Ai-Ais. The Fish River Canyon probably formed about 500 million years ago. However, the gorge was not only created by water erosion, but also through the collapse of the valley bottom due to movements in the earth’s crust. 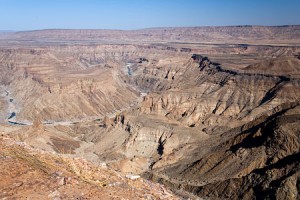 Because the Fish River is being dammed in Hardap near Mariental, it only contains a small amount of running water. In winter, during the dry season, the riverbed is often completely dry or reduced to only the occasional puddle. However, after rainfalls in summer the river can become a raging torrent.