The landscape of the Eastern Cape is extremely diverse. The western interior is largely arid Karoo, while the east is well-watered and green. The Eastern Cape offers a wide array of attractions, including 800km of untouched and pristine coastline along with some particularly splendid beaches, and “Big Five” game viewing safaris in a malaria-free environment.

The Addo Elephant National Park, situated 73km from Port Elizabeth, was proclaimed in 1931. Its 12500ha offers sanctuary to 170 elephants, the last Cape buffalo and 21 black rhino of the very scarce Kenyan sub-species.

The National Arts Festival, held in Grahamstown is Africa’s largest and most colourful cultural event, offering a choice of the very best of both indigenous and imported talent. Every year for 11 days the town’s population almost doubles, as over 50 000 people flock to the region for a feast of arts, crafts and sheer entertainment.

The Tsitsikamma National Park is an 80 km long coastal strip between Nature’s Valley and the mouth of the Storms River. In the park the visitor finds an almost untouched natural landscape. Near the park is the Bloukrans Bridge, which is the world’s highest bungee jump.

Jeffreys Bay is an area with some of the country’s wildest coastline, which is backed by some of Africa’s most spectacular sub-tropical rainforest. Famous for its “Supertubes”, probably South Africa’s longest and most consistently good wave, it’s charged with a surf vibe as relaxed as it is friendly, and this tends to soften the effect of the wealthy set who have made this part of the coast their own.

The rugged and unspoilt Wild Coast is a place of spectacular scenery, and a graveyard for many vessels. This is some of the most idyllic coastline, yet quite inaccessible and with no coastal road it is not easy to get around. 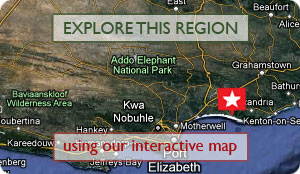