The Garden Route includes one of the most beautiful stretches of coastline, whose starting point is constantly contested as towns such as Witsand, Stilbaai and Albertinia join the route that winds its way for some 200 km via George, Wilderness, Sedgefield and Knysna on to Plettenberg Bay and culminating in the Tsitsikamma forest – a fairyland of giant trees, ferns and bird life.

Mountains crowd close to a shoreline dotted with beaches and bays, and vividly coloured wild flowers delight the eye. Between Heidelberg and Storms River, the Garden Route runs parallel to a coastline featuring lakes, mountains, tall indigenous forests, amber -coloured rivers and golden beaches. Meandering trails are followed by hikers, the forests invite long leisurely drives and the lakes and rivers lend themselves to swimming boating and fishing. A wide range of leisure options, spectacular scenery and a mild climate guarantee an unforgettable holiday experience when visiting the Garden Route in South Africa.

The region provides a stirring study in contrasts. The delightful town of George, known as “The Gateway to the Garden Route”, graces a coastal plateau in a fertile area of lush greenery at the foot of the Outeniqua Mountains. Oudtshoorn, “Capital of the Little Karoo” is set in a semi-arid valley, providing the ideal habitat for ostriches which are farmed here on a grand scale.

The Garden Route stretches on the southern coast from Heidelberg to the Tsitsikamma Forest and Storms River. It’s a nook of the country that offers inspiration to writers and artists whose presence gives the Garden Route a trendy flavour. It is also a top priority of many a foreign visitor. The coastal drive links a series of charming towns interspersed with natural beauty. Along the way, every kind of adventure activity is possible: bungy jumping,  mountain biking, abseiling, canopy tours and more.

The Tsitsikamma National Park perched on a tumultuous Indian Ocean shore is one of South Africa’s most dramatic protected areas, combining marine and land attractions. Its indigenous forests are a haven for birdlife. One of the most geologically interesting parts of South Africa is the Klein Karoo, with its towering fold mountains and sheer gorges.

An important geological feature is the Cango Caves a series of caverns and chambers naturally hewn out of limestone, situated outside the city of Oudtshoorn. The Cango Caves are among the top ten most visited South African attractions. Oudtshoorn itself, the heart of the Ostrich feather industry when it was in its heyday the late 1800s and early 1900s, is well worth a visit. The grandiose, old feather palaces are still to be seen, while ostrich farms, now involved in the commercial production of meat, leather, eggs and feathers, can be toured, with the possibility of riding an ostrich. 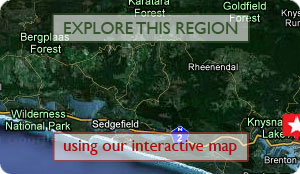