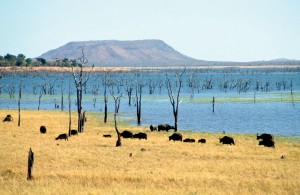 Matusadona National Park is a relatively unknown national park in Zimbabwe and because of this it has become one of the best Zimbabwean National Parks to visit. The Matusadona National Park is located on the western side of Zimbabwe, on the southern shores of the famous Lake Kariba. This Zimbabwean National Park is relatively unknown and undiscovered making it a safari wilderness highlight. Located in the Park are a series of hills called the Matuzviadonha hills; they are found on the lush open plains of this beautiful and diverse area… Matusadona actually derived its name from these hills; Matuzviadonha means “falling dung” which is, interestingly enough, believed to describe the elephant’s droppings as they walked up the hills!

Mattusadona is one of the last remaining sanctuaries the black rhino calls home; the black rhino is part of the ‘Big Five’ and is on the endangered animals list. This Zimbabwean sanctuary provides them with a safe refuge and sanctuary. In addition, you will find the largest concentration of wild lions in all of Africa (after the Ngorongoro crater). 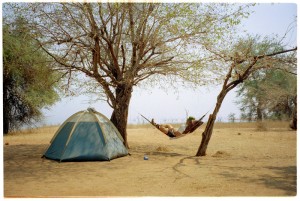 Most of the animals in the Matusadona National Park are from the ‘Operation Noah’ project. ‘Operation Noah’ refers to the time when Lake Kariba was filling-up with water and the area surrounding the lake was becoming highly dangerous for animals. Most of them were then captured, transported, and safely released into the Matusadona National Park. A number of animals can be spotted in this environment such as hippos, crocodiles, lions, buffalos, elephants, waterbuck, hyenas, waterbuck, rhinos, sable, zebra, eland, owls, amongst others.

In addition, a range of interesting activities are offered in the Park such as game drives, safaris, night viewing, game walks, hikes, and even fishing. Lake Kariba offers the opportunity to try your hand at tiger and bream fishing as well.

Visiting the Matusadona National Park can be done all year round as the weather is surprisingly pleasant. Winter months are between May and September; however the ‘winter’ is almost as warm as summer – with warm days, clear nights, and minimal rain. Most of the rain falls in the summer months with afternoon electrical storms between October and April.