The Makgadikgadi Pans National Park features magnificent grasslands stretching as far as the eye can see. This area was once a super lake almost 80,000 sq km in area, but dried up due to the changing climate. The name of the Pans implies a vast lifeless land and for most of the year when they are dry salty clay crust, it does seem this way. But, when showered with rain, the water and grass of the Pans serve as a refuge for animals and birds. In addition, riding a quad bike across the desolate Pans proves to be a thrill for anyone who dares. There are also the occasional rocky outcrops and large stranded sand dunes spotted across the area. The ancient mystique of this Park gives way to isolation and serene quiet. With beautiful sunsets one often feels as though they are lost within a surreal wonderland unlike anything they’ve seen or experienced before.

The Makgadikgadi offers four main types of vegetation: scrubland, saltpans, pure grassland, and riverine woodland. Some unique products of these environments are a peculiar looking tree called the Baobab or nicknamed the ‘upside down tree’, whose branches look as though they are actually tree roots. The ‘prickly salt grass’ found on the rises between pans is also a unique short and spiky yellow grass common to the area. It is not uncommon to find Stone Age tools just lying about amongst the vegetation as you meander throughout the Park. Many travelers pick them up, examine them, and leave them for others to discover the revels of this amazing landmark. 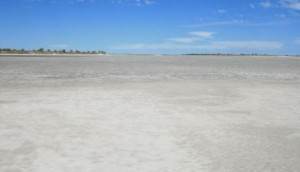 Home to a number of various animal species, the Park is most well known for the migration of thousands of animals moving from the pans area in the southeast of the Park to the Boteti River on the western side. Here one can often see magnificent game such as zebra, wildebeest, gemsbok, and springbok moving in herds across the outstretched land. The heavily vegetated wooded areas near the riverbanks also provide a home for many antelopes like bushbuck and duiker. One of the most astounding features of Makgadikgadi, however, is the astounding flamingo breeding season on Sowa Pan. Its tiny crustaceans in this area provide nourishment for the largest breeding flocks of flamingos in all of Africa.